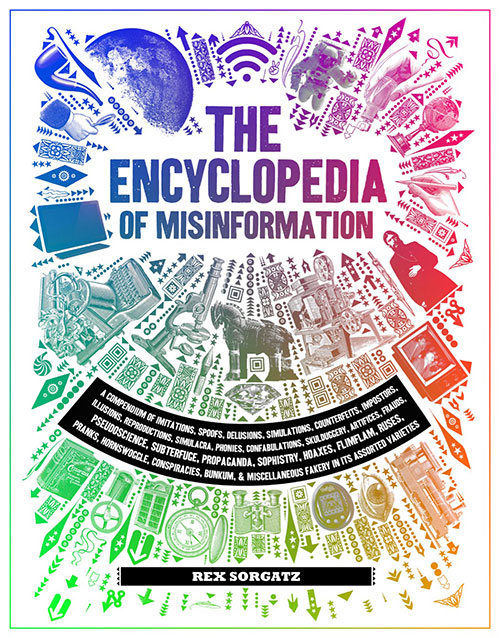 I wrote a book!

It's a strange little collection of tales and tactics of deception and mischief and subterfuge. I sometimes describe as an interactive essay about fakery. It ricochets through reality television, alternate histories, cognitive psychology, documentary reenactments, evolutionary mimicry, artificial intelligence, linguistic trickery, professional wrestling, sex bots, art forgery, and every topic where things are not what they appear.

Have we met? Probably. I have been an Alaskan fish butcher, a web designer, the editor of a paranormal magazine, a proto-blogger, the co-founder of a few startups, a digital consultant for many media companies, a music critic, a Flash developer, the editor of an alt-weekly, a contributing editor at Wired, a dungeon master, a North Dakotan, a failed med student, a director of the Olympics website, an encyclopedian, a Microsoftie, a fast-food innovator, a public radio tech commentator, a code monkey, a script kiddie, a microfame faux-expert, a technology instructor, the editor of a print magazine about the web, an early hyperlocal website creator, a first amendment defendant against a popular satirist, a webshow producer, a kinda shitty guitarist, a slightly better poker player, an executive producer at msnbc.com, a webmaster, and part of a team awarded a Pulitzer Prize.

I liked college a little too much. I have three Bachelor's Degrees (Philosophy, Literature, Psychology), two Minors (Art History and Intellectual History), and an unfinished Masters (Digital Media).

I like to write about the intersection of technology and culture.

I have two newsletters.

This first contains weekly recommendations from culture, tech, media, design, and science.
Sign up for that one over here.

The other one is more like yearly, and contains updates on big projects. For that one, enter your info below: